Douglaston Hill is marking the 150th anniversary of its transition from rural farmland to suburban neighborhood. On July 23rd, 1853, the “Map of the Village of Marathon (now Douglaston Hill), at the head of Little Neck Bay” was filed, thus forever transforming Jeremiah Lambertson’s farm into what would eventually become, and still is to this day, a classic example of a “Garden Suburb.” Douglaston Hill is included in the National Register of Historic Places and the New York State Register of Historic places.
“The filing of this map is historically significant not only to Douglaston but to all of New York City.” According to William Sievers, Vice President of the Douglaston / Little Neck Historical Society.
“Lambertson’s creation of large 200 ft. by 200 ft. lots laid out in an urban grid represents the genesis of a New York City suburb. The neighborhood is still largely intact, allowing people today to see first-hand how suburban life in the city evolved.”
“When you walk through Douglaston Hill you feel like you have traveled back in time.” notes Kevin Wolfe, Architectural Historian, DLNHS Founder and past President. 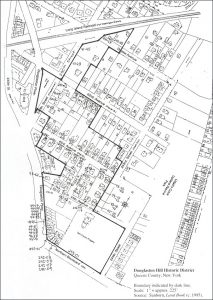 Douglaston Hill is bounded on the south by Northern Boulevard, on the west by Douglaston Parkway, on the north by the Long Island Railroad’s Port Washington Line and on the east by Udall’s Cove Upland Ravine Park. While the land was subdivided and sold 150 years ago, the area behind Zion Church was not developed in earnest until the late 1800s to early 1900s, with most lots built upon by the 1930s. Architectural styles ranging from late nineteenth and early twentieth century Colonial Revival, Queen Anne, Shingle Style, Tudor Revival, Prairie Style and American Craftsman designs still exist throughout “the Hill.”

The Douglaston Little Neck Historical Society will be celebrating Douglaston Hill’s sesquicentennial with a series of events culminating on October 18th with tours of area homes, the Zion Churchyard, and Udall’s Cove Upland Ravine all of which will be followed by a reception at the Community Church of Douglaston. Here’s a schedule of the planned events:
10:30am – 2pm Check in at Zion Church Parish Hall  (44th Avenue). All tickets including house tour brochure will be available that morning
11am Walking Tour: Upland Udalls Cove Ravine
11am – 4pm Zion Churchyard Tour (self-guided)
12 noon – 1:15pm Historical/Architectural Tour of Douglaston Hill
1pm – 4pm House Tour: Douglaston Hill Homes
2:30pm – 5pm Reception at “The Attic” cafe lounge (Reserve early. Space limited.)

Douglaston Hill was added to the National Register of Historic Places and New York State Register of Historic Places on September 12th, 2000. The community applied for New York City Landmark Designation several years ago and their application is currently under review by the Landmark Preservation Commission. The Douglaston Little Neck Historical Society, a not-for-profit 501c(3) corporation, was founded in 1989. The DLNHS’s mission is to encourage historic research, preserve and protect historic buildings and sites, collect and preserve historic records and relics, and promote public knowledge of, and interest in local and national history. The society receives support from the Preservation League of New York State, New York Council on the Arts Grant Program and the Historic District Council of New York.