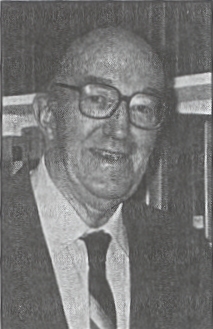 Charles F. Marshall, author of Discovering the Rommel Murder, The Life and Death of the Desert Fox (1994), was born in Hoboken, New Jersey, but has lived most of his life in New York. He lived at 42-13 243rd Street (Orient Avenue) in Douglaston Hill from 1946 until 1999. Mr. Marshall is a graduate of Columbia University, the U.S. Army’s Armored Force Officer Candidate School, and its Military Intelligence School. In the service from 1942 to 1946, he was involved in campaigns in Italy, France, Germany and Austria. He was decorated for his rapid exploitation of captured enemy maps, field orders and pertinent documents. At the war’s end Marshall supervised interrogation in prisoner-of-war, internment and war crimes camps.

After leaving the Army, Marshall was for many years a partner in a knitting mill. He has eight children, three stepchildren, and twenty grandchildren.

by Kevin O’Neill (for the Little Neck Ledger)

As a young Army intelligence officer writing for a military newspaper, Douglaston resident Charles Marshall was the man who broke the news to the world on May 2, 1945 that German dictator Adolf Hitler had ordered the murder of his greatest general, Field Marshall Erwin Rommel.

Unfortunately for Marshall, his sensational scoop was bumped from the top of page one by the announcement of Hitler’s own death.

“It was still a helluva story,” recalled Marshall, 79, during an interview at his home. “I remember the editor telling me, ‘Don’t feel bad. Hitler had to kill himself to top your story.'”

The details of how Marshall came to learn of Rommel’s murder from the field marshall’s widow and aides are included in his newly published biography of Rommel titled, Discovering the Rommel Murder: The Life and Death of the Desert Fox. Published by Pennsylvania-based Stackpole Books, the 288-page book has the feel of a political thriller as it combines historical biography with then-Captain Marshall’s first-person account of his investigation into Rommel’s death.

Discovering the Rommel Murder recounts Rommel’s growing disillusionment with the Nazi hierarchy, his fateful decision to support a coup against Hitler and his subsequent arrest and death at the hands of German SS officers.

It is based on Rommel’s own journals and letters plus lengthy firsthand interviews Marshall had in 1945 and 1946 with Rommel’s widow, Lucie Maria; son, Manfred; his chief of staff, General Hans Speidel; and others close to him. Contained in the book are dozens of photographs of Rommel provided by his widow and Speidel.

Discovering the Rommel Murder has won praise from Publishers Weekly and one military historian. Thomas Burdett, of the University of Texas at El Paso, said Marshall’s book had “rendered all previous biographies of the Field Marshall obsolete” because of the author’s “unique perspective.”

Assigned to the Army’s VI Corp as an intelligence officer, Marshall was in Germany in the spring of 1945 as Allied armies rapidly advanced against the collapsing German military. Fluent in German, he as responsible for the interrogation of captured high-ranking officers and other important figures. One of those figures was Rommel’s widow.

Marshall first got the opportunity to speak with her in late April 1945, when American troops captured the town containing Rommel’s villa. At first, the widow – fearful of possible reprisals by Nazi agents – simply reiterated the official version of Rommel’s death. But eventually she broke down, telling Marshall’s aide, Sergeant Thomas Greiner, and later Marshall the astounding tale of how her husband had been forced to take poison after German SS officers discovered his links to a ring responsible for a July 1944 assassination attempt against Hitler.

Over the next year, Marshall pieced together the events leading to Rommel’s death. He learned of how Rommel was disgusted by the Nazi party’s petty corruption and racial obsessions. Possessing a traditional soldier’s code of chivalry, Rommel defied Hitler’s orders to execute prisoners of war and cooperate with the SS in rounding up the Jews in occupied countries. But what ultimately drove Rommel to become involved in an ill-fated plot to overthrow Hitler was his conviction that the war was lost.

“Rommel very much wanted the war to end. He was appalled at the destruction. He saw no hope of Germany either winning or even getting a stalemate,” Marshall said. “He was a professional soldier who believed that when a war is lost you sue for peace, you sue for an armistice.”

Marshall originally wrote the manuscript for Discovering the Rommel Murder back in 1946 but got rejection slip after rejection slip from American publishers. He displayed a copy of what he described as a “typical one” from an editor who told Marshall his book was “absolutely fascinating” but unpublishable because of its positive portrayal of a German military leader.

“The anti-German feeling was so strong and so bitter at the time. My timing was just bad,” said Marshall.