The club’s good friend, Maldwin Drummond, former commodore of the Royal Yacht Squadron, recently received a query from Judge Richard Price, a British jurist, asking about an interesting piece of silver that has been passed down through his family for more than 130 years, and that has to do with one of the New York Yacht Club’s most famous yachts. The cup is inscribed:

In appreciation of his kindness and the valuable
Assistance rendered by him board that Vessel
During her successful Matches with the
Schooner Yacht Cambria
May 10th, 14th & 17th, 1870

Judge Price is a descendant on his mother’s side from George Greenham, a mariner who, the judge speculates, served as pilot aboard SAPPHO during these races. A handwritten letter signed by Douglas says in part, “I shall never think of my triumphs in the SAPPHO without associating them with you.”

The judge wants to know more about the yacht and his ancestor’s friend. Here is what I have found out from published sources, including the club history, W. P. Stephens’s Traditions and Memories of American Yachting and Internet sites. 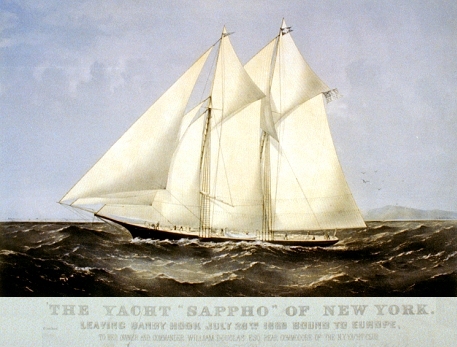 One of the great racing schooners of the day and an America’s Cup defender in 1871, SAPPHO was a 145′ LOA, 121’LWL keel schooner built in Green Point, Brooklyn, in 1867. A development of the yacht AMERICA, she was first owned by Richard Poillon, her builder, who built her on speculation. The next year, looking for a buyer in England, he took SAPPHO to Cowes, and she sailed in an Around-the Island Race there and finished last. SAPPHO’s efforts in 1868 may not have been successful for her then owner, but she helped restore friendly Anglo-American sporting relations, which had been fractured during the Civil War. James Ashbury soon issued the first challenge for the America’s Cup since it was put into play in 1857.

SAPPHO was sailed back to New York in 1868 and acquired for $50,000 by 24-year-old William Douglas. “A spirited and wealthy young yachtsman,” according our great yachting historian, W. P. Stephens, he put her in the hands of a successful builder and skipper named Bob Fish, who made alterations that turned her into a winner.

Douglas’s father, a Scotsman and graduate of Columbia College in New York, in 1835, had the foresight to acquire (for $25,000) some 120 acres of waterfront property on Little Neck on the north shore of Long Island at the eastern edge of present-day New York City. The father died in 1862, leaving the property and his Scottish estates to his son “Willie,” who was known as a playboy and a sailor of big yachts.

In 1869 SAPPHO returned to England under Douglas and Fish (making the passage to Queenstown in only 13 days, 9 hours), and in May 1870, she raced CAMBRIA in three races – two of which were highly unusual 60-mile one-legged courses to windward. She easily beat the English yacht. Ashbury (who so far as I know was never knighted) somewhat smudged these contests with complaints of one sort or another about conditions and handicaps. Those are the three races referred to on George Greenham’s cup. SAPPHO sailed back to New York to some acclaim. Here is a contemporary newspaper report of Willie Douglas’s return home to the Long Island town of Douglas Manor, in Queens, NY:

“His neighbors at Douglaston warmly welcomed Mr. William Douglas last Saturday after his brilliant sojourn abroad, winning a famed victory with the yacht SAPPHO over the CAMBRIA. The flag at the Douglaston depot was raised and the reception was enthusiastic. Residents gathered at nightfall and serenaded Mr. Douglas at the old mansion, marching in torchlight procession with the military band from Willett’s Point and Scottish pipers in the van. Refreshments were provided; all were invited to partake. No one had been advised more than an hour previous of Mr. Douglas’s expected arrival and everything proved more pleasing for being wholly imprompt”

CAMBRIA raced the schooner DAUNTLESS (owned by Douglas’s close friend James Gordon Bennett, Jr.) from Ireland to New York, winning by a small margin. There followed the first race for the Cup, the only fleet race in the Cup’s history. CAMBRIA finished tenth, and SAPPHO did not sail.

Ashbury returned in 1871 for another try for the America’s Cup in his new LIVONIA (said to be a near-copy of SAPPHO). In response to his complaints about the fleet race, the New York Yacht Club agreed to a one-on-one match but reserved the rather extraordinary right to choose a different defender each day. One of those was SAPPHO, which, after LIVONIA succeeded in winning one of the first three races, was victor in both the fourth and the decisive fifth races. (Ashbury protested vehemently without success, and later settled in New Zealand where, it is said, his combative spirit migrated to Sir Michael Fay.)

W.P. Stephens indicates that the schooner returned to England in 1872, but there is no other record of such a voyage in the printed sources I have here. In 1876 Douglas sold SAPPHO to an Italian Prince named Sciarra, and with that the schooner disappears. Stephens wrote that among racing schooners that competed in America and abroad, “one name stands out above all others: that is SAPPHO.” Her career, he went on, was “most notable among a grand fleet of ocean cruising and racing yachts.)

Willie Douglas served as rear or vice commodore of the NYYC between 1869 and 1874, but declined invitations to be commodore. He was a generous donor of expensive racing trophies and built a defense candidate for the 1885 America’s Cup, but as his money grew thin, he stepped back from yachting. In 1906,he sold off the property, which was developed into the “garden suburb” town of Douglas Manor. The family home is now the Douglaston Yacht Club’s clubhouse. A SAPPHO Trophy for traditional yachts has been awarded by his grandson at New Port.

Read “On The Yacht Sappho” by Bloodgood Cutter, 1869