Old Little Neck School 1865 – 1914 The first school in the area was the two room Lakeville School. It was located at Bates Road and Little Neck Parkway (then called Lakeville Road and Little Neck Roads respectively) on land donated by John Cornell in 1865. When Queens County joined New York City in 1898 it became Public School 32 and was expanded to five classrooms. It served until the new PS 94 opened a half mile north in 1914. The school was eventually bought by Douglaston resident Frank T. Powers who used it for his photographic supply business, Powers Chemical Company. The building was torn down sometime after Powers Chemical moved to Glen Cove. Today it is the site of the Church of Jesus Christ of Latter Day Saints – Queens Ward. 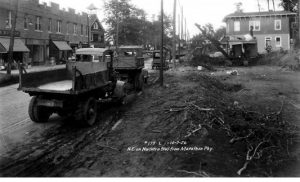 “It has been the practice of Mr. Wood for many years past, to throw open his beautiful grounds on the night of our great National Birthday, for the amusement of his friends and neighbors. It is an invitation understood by all, and thousands availed themselves of it in the occasion, and passed a few hours of uninterrupted enjoyment. We, among others, turned our steps to the Long Island Mecca, and after a delightful ride of fourteen miles, passing through the pretty town of Flushing and a beautiful country, we arrived at the elegant grounds and villa of the popular and courteous host, Benjamin Wood, Esq. The grounds consist of a homestead of over sixty acres of the most fertile and productive land, finely wooded and replete with features of beauty…”.

1938 Hurricane Picture and caption provided by Don (Ken) Smith: “The original picture appeared in the Little Neck Ledger that was run by Ida Fowler and located on 44th Avenue just around the corner by Little Neck Parkway as I recall. It was given to me by the Fowler’s sometimes in the 40’s. The picture was taken from the South side of 43rd Avenue (Clark Street) looking toward 248th street (Soundview Avenue). The houses shown are attached homes (Bosset) on the East side of 248th. I lived at 42-39 248th street and watched the 1938 hurricane damage taking place. At the time the street was lined with Poplar trees and one after the other they came down. They took electric lines and telephone poles with them, but remarkably there was little damage to the houses. Eric Nitchke (sp?) who still lives on 248th told me there is only one of the old Poplar trees still standing and it is near Northern Blvd. (Broadway).”