The Douglas Manor historic district is located in the northeast corner of Queens between Great Neck Estates and Bayside, 12 miles east of Manhattan.

Indian Settlement: The peninsula was first settled by the Matinecock Indians who cleared the forest to raise corn. The peninsula (originally known as Little Neck) also became a center for wampum making because of the abundance of shells, including conch, quahogs, and periwinkles. The Matinecocks made white wampum from periwinkles and the valuable black wampum from quahog shells.  Through the years, various Native American burial sites have been unearthed on the Douglaston peninsula, including several at the Point, and one on Hillside Avenue. Matinecock Indian remains were moved from the Indian Cemetery in Little Neck to the Zion Episcopal Church cemetery in Douglaston in 1931 when Northern Boulevard was widened.

The Van Wyck Farm, 1735: The early Dutch settlers embraced the richness of the natural environment at Douglaston afforded by the long narrow inlets and harbor at Little Neck Bay. At the Douglaston peninsula, tidal wetlands provided an abundance of shellfish and salt hay for cattle. A network of farms was quickly established in the area, utilizing the creeks that ran through the wetlands at the “Alley” (near what is now the intersection of the Cross Island Parkway and the Long Island Expressway) and Udalls Cove. Docks at these two locations were used to move goods and supplies to and from Manhattan. The shingled Dutch Colonial farmhouse at West Drive and Alston Place was built by the Van Wyck family. The front of the house faces the Bay, testimony to the importance and relative speed of water travel compared to overland travel routes to Manhattan.

Douglas Mansion, 1819: In 1819, Wyant van Zandt, a wealthy New York City merchant and alderman, purchased the Van Wyck farm, and built a large square mansion for his wife and 11 children. The transformation of the peninsula from working farm to country estate signaled the beginning of the era of country house and estate development along the North Shore of Long Island.

In 1835, George Douglas, a wealthy Scottish immigrant, purchased the estate and began developing it with plants and trees imported from all over the world.  Douglas worked with Samuel Bowne Parsons, the Flushing nurseryman who was famous for bringing the Weeping Beech tree to America. Parsons supplied Douglas with much exotic flora and fauna over the years, and helped Douglas create one of the garden spots on Long Island. The estate included a pinetum and many rare trees which survive to this day. Two of Parsons’ original plantings, a European beech tree and a Sugar Maple, survived more than 150 years into the early 21st century as elegant specimens on the front lawn of the Douglaston Club.

Douglas’ son William took over the estate after his father’s death in 1862, and continued to develop the estate’s horticultural assets, and as a social center. Little Neck Bay became the focus for many yachting activities, and Douglas and his friends were responsible for introducing polo to America. In 1871, he refitted a British yacht, the “Sappho”, which was built in Greenpoint, Brooklyn, which successfully defended the second Americas Cup in 1871. James Gordon Bennett, publisher of the New York Herald, and financier J. P. Morgan often moored their yachts–the “Dauntless” and the “Corsair” respectively–on the Bay during their frequent visits to the Douglas estate. The estate remained a social hub for entertaining the wealthy and powerful of New York until the turn-of-the-century, when the Douglas family decided to sell the property.

Douglas Manor, 1906: The Rickert-Finlay Realty Company of New York purchased the 188-acre estate and began selling family house lots in 1906. The subdivision was planned according to Garden City ideals. The community was designed for middle and upper middle class families who were disturbed by the erosion of once stable neighborhoods in the City that were increasingly industrialized. These families sought a greener, quieter environment where they could purchase a house with a small garden and be within easy commuting distance of Manhattan.

In an era before New York City zoning, the planners of the Manor created deed restrictions that prohibited businesses and other non-residential uses that had spoiled older high quality residential areas of Manhattan. Only single family homes were permitted in the Manor; stores and service oriented businesses, as well as churches and schools, were concentrated at the Long Rail Road stop for Douglaston.

The Manor’s streets were laid out in a grid that curves to accept the natural contours of the land and the shape of the peninsula. The houses are set back a minimum of 20 feet, giving the narrow streets (18 feet wide) definition, and creating an urban feeling in a neighborhood that is essentially suburban.

The deed restrictions dictated setbacks, height, density, and minimum cost. Fences beyond the front building line were prohibited. Privet hedges were planted to define property lines, and to give the owners of the relatively small lots the idea of a visually shared green space. Minimum lot size was determined by desirability, with the larger lots (a minimum of 100 by 100) facing Little Neck Bay on the west side, with lots as small as 40 by 100 facing the tidal wetlands of Udalls Cove. Modest cottages were built on the smaller lots for people of moderate means; along Shore Road, some of the larger houses had 12 rooms and included maid’s rooms and chauffeur’s quarters. Unlike similar developments that followed at Forest Hills Gardens (1911) or Kensington in Great Neck (1912), no restrictions were put on the style of the homes built. As a result, today the Manor has a collection of homes that encompasses every residential style of the early 20th century, including Tudor Revival, Mediterranean Revival, Queen Anne, Arts & Crafts, and Colonial Revival style homes.

The most radical decision Rickert-Finlay made however, was the development of the shoreline in common for the use of all the residents, unlike developments at Bayside and Great Neck, where the shoreline was developed privately and is not accessible. Shore Road, a lightly traveled road that separates homes from the waterfront, now functions as the neighborhood’s pedestrian promenade. Neighbors typically stroll in the roadway where they socialize, enhancing the village-like quality of the Manor.

The close proximity to the railroad–no house is more than a mile from the station–also contributes to an unusual amount of pedestrian activity for a suburban area. These features make the Manor different from the auto-oriented suburbs that typically were built after World War II. The geographic boundaries of the Manor–a mile-long peninsula with only one major access road from Northern Boulevard–reinforces the psychological sense of a small sheltered town.

Below are a collection of photographs from around the neighborhood. Be sure to see the Before and After photographs of old and current Douglas Manor sites. 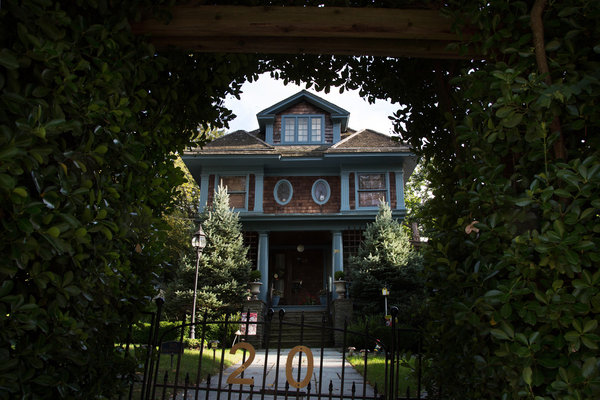 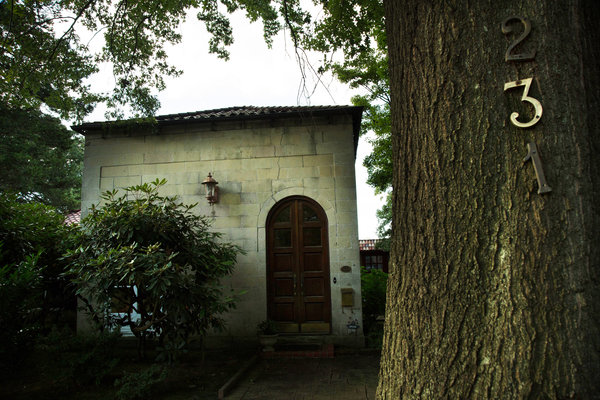 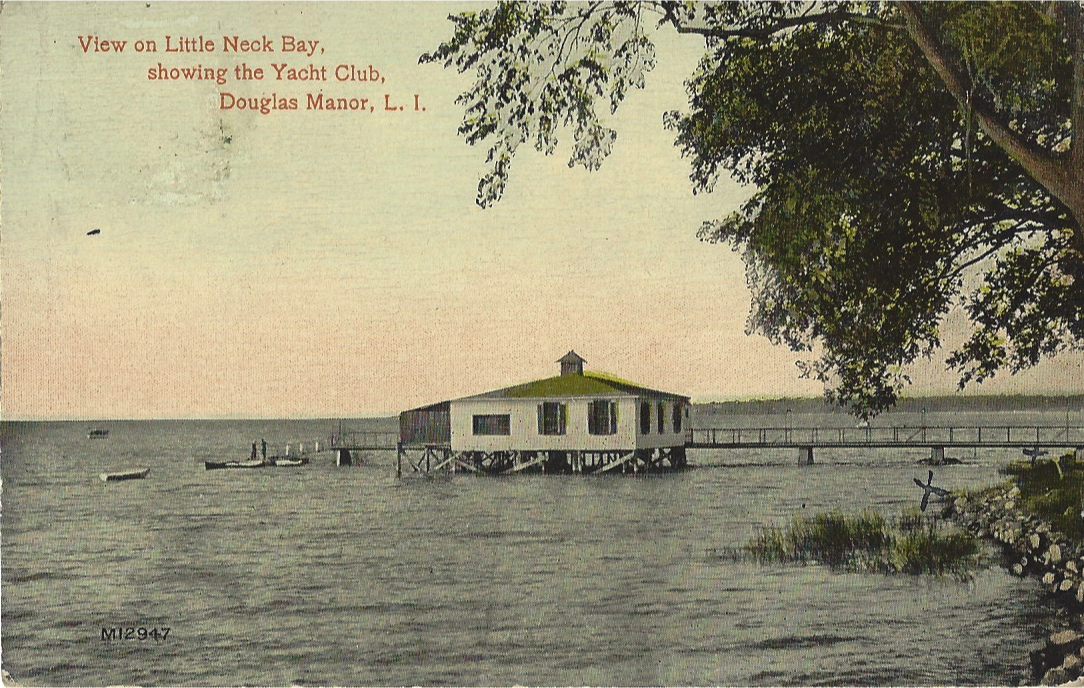 See an old Menu from the Douglaston Club – (PDF Format)  Need to upload the menu as it is over 2MB. 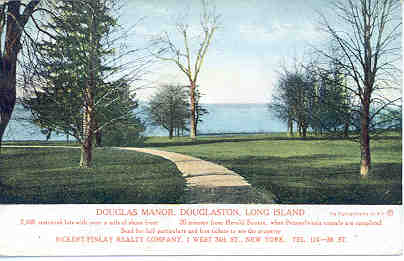 Douglaston Works at Being So Near, So Far